"The Mortal Instruments: City of Bones"
Directed by Harald Zwart
Starring Lily Collins Jamie Campbell Bower, Kevin Zegers, Jemima West, Robert Sheehan, Robert Maillet, Lena Headey, Jared Harris, Jonathan Rhys Meyers, Aidan Turner
Action, Adventure, Drama
130 Mins
PG-13
Going to see The Mortal Instruments: City of Bones is like getting a filing from a dentist whose supply of Novocaine has run dry. It's a painful eternity of an experience that hacks and saws at our entertainment-guzzling sensibilities, defying each and every lesson culled from filmmaking 101 and spewing formula like a film-school-dropout on Ipecac. The "talent" both in front of and behind the camera is so raw-dogged and askew that it almost seeks to redefine "so bad, it's good". Needless to say, it misses that mark by a long shot and winds up in its own realm entirely, almost unknowingly. The result is strangely akin to watching a child play in a turd-peppered litter box, mistaking it for the sandbox he knows and loves, helpless to clue the poor thing in on its brown-handed error.

You may find yourself laughing aloud at the twisted excuse for a story as it fumbles over and over but it feels like laughing at a cat chasing after a laser pointer. You feel the cat's pain and its confusion as it bounds around searching for direction, tragically confuzzled when it comes up empty-handed time and time again, but when all is said and done, you're thinking to yourself, "What a dumb cat." In this regard, director Harald Zwart is much like a dumb cat.

Even by teen franchise standards, Zwart's hyperventilated storytelling is embarrassingly crude and majorly derivative. He's proven himself to be a more slack jawed character director than Bill Condon with less story assurance than Rupert Sanders. Anytime I'm sitting in a theater daydreaming about  Twilight, a loss has occurred on an epic level. 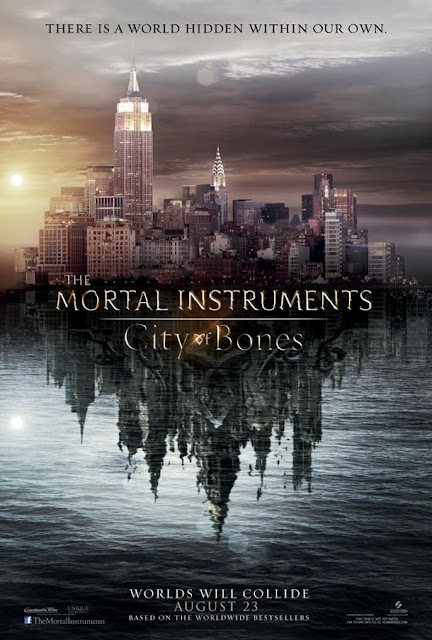 At the helm of the cluttered wreckage is Lily Collins as Clary, a plain-Jane teen who discovers that the blood of Shadow Hunters run in her veins when her mom is abruptly kidnapped. Shadow Hunters are age-old crossbreeds between humans and angels, invisible to the normal human eye, sent to Earth as guardians. They are tasked with ridding the world of demons that physically manifest themselves as fiery monsters and tentacle dogs. Also, vampires, because fuck you.

Naturally, werewolves are also in the mix and they're aligned with the good guys, maintaining a shaky and largely undefined alliance with the Shadow Hunters. But the relational web is so whitewashed and barren that it's hard to get a read on exactly who is who and what is what and why exactly you're supposed to care about anyone and anything. Also, a vampire bites a lead character. But don't worry, none of that will actually matter in terms of the story nor will it ever be addressed again. 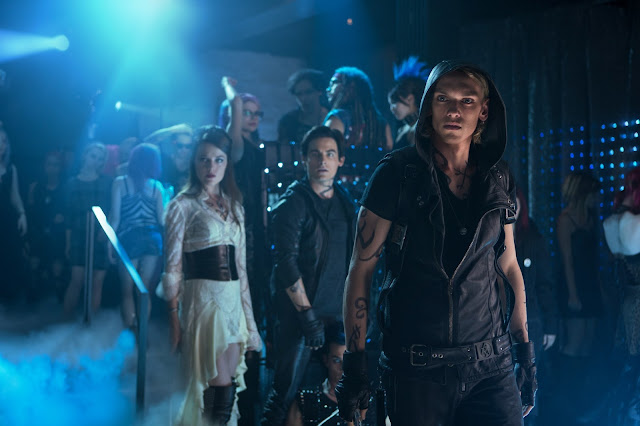 The rhyme and reason underlying any one of the scenes seems to be up to your own willingness to accept stupidity at face value. Honestly, I'd be shocked and amazed if anyone who hadn't read the popular books upon which the movie is based could offer a reasonable plot point to plot point analysis after getting through this genuine nightmare. It is a near impossibility because nothing is ever allowed to breathe; it just charges along completely blind to the wreckage that it calls narrative.

For his part, Zwart can't even handle the most commonplace of arcs. He chugs along letting the plot holes blow bigger and bigger. Had I been as apparently drunken as the people OKing this 2-hour-(plus!!) brain rape, it probably wouldn't have been so bad. As it is, I'm already eager to slam it with the title of "Worst Movie of the Year."

Although Collins (Mirror Mirror, Abduction) is a far cry from good, she does manage to escape more unscathed than her co-stars, who are wholly terrible. The broodingly gaunt Jamie Campbell Bower as Jace mistakes duckface for acting as Kevin Zegers's moody Alec is a simple shade of angst, fearfully meek in personifying homosexuality within a family-friendly environment. But none compare to the appallingly untalented Godfrey Gao, a minor character whose limited presence sucks the air right out of the scene. Casting folly notwithstanding, Gao serves as his own executioner. In his debut picture, he's just acted his way out of a career. 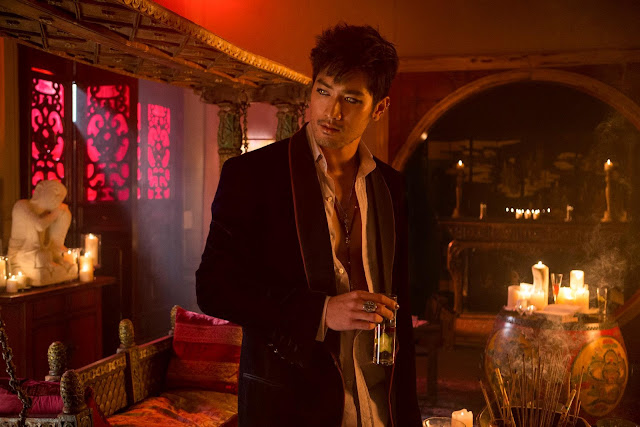 Perhaps this unkempt company isn't quite to blame though considering the script doesn't seem to allow for any semblance of good acting, as most of the scripted lines are expository reports rather than genuine colloquial speech. With her debut screenwriting credit, Jessica Postigo has chalked up character motivation as flimsy as toothpicks, bending with the shift of the wind, which share the one-time-use disposable trait. Each and every action and reaction is about as thought through as the choice to sneeze or not. But still the thing sputters along, weaving a miscalculated web of romance, all of which by film's end wind up being creepy, incestuous or homophobic.

While not shoehorning in love triangles until the skin-tight leather seams are about to burst, Zwart tries to usher in a level of self-awareness that escapes him and his performers. While trying to buddy up to the fan base and poke fun at the film, Zwart is having his cake and eating it too. But this cake is actually a grave, and he's digging it deeper by the second. Even though it boasts an impressive amount of "laugh at us, not with us" lines, nothing is nearly as satisfying as the long awaited breath of relief when this invasive clunker has finally run its course.


Within the genre norms of trying to razzle-dazzle preteens and generally younger audiences, the film somehow manages to miss yet again. It's impossible to reconcile the film's darker, near grotesque creature designs with the flowery teen-sheen of the character relations but they're all sharing the screen in their misfitted glory. As Zwart turgidly shovels plot points and familiar character beats into a witch's brew of genre cliches, the only spell he ends up casting is a sleeping spell. Sadly those do not exist in the real world, so parents - be sure to bring along a double dose of Ambien.

To return to the initial analogy, Zwart's teenaged musings can really only be compared to the unwelcome discomfort we experience sitting in a dentist's chair, jaw braced and teeth probed. Mortal Instruments is a grin-and-bear-it slog so relentless in its awful tendencies that the result is a special kind of agitating. As if untrained interns were solely responsible for the shaggy writing and Julienne-chopped editing, the film tries to substitute genuine craft with a stale pump of out-of-date laughing gas and a slopjob of visual flair that doesn't even hold up to post-2000 standards. In a word, it's absolutely dreadful...the brand of active, egregious dreadful that I wouldn't wish on my worst enemy.