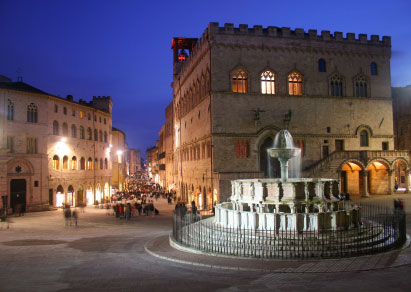 Set in Umbria’s picturesque hills—“the green heart of Italy”—Perugia is home to two leading universities, extraordinary Umbrian architecture, and a rich artistic and cultural heritage from Etruscan times to the Middle Ages and the Renaissance. The Festival draws inspiration form the city’s historical narrative, paying tribute while creating a framework for innovation. A different kind of festival, it is an idyllic forum for original thinkers and visionaries to start conversations, generate new ideas, and immerse themselves in all artistic genres.

The Perugia International Film Festival will present films that exemplify traditions of craftsmanship as well as of aesthetic and technological innovation. An annual focus of the Festival will be to honor the work of the masters behind Costume Design and Production Design - integral, but rarely recognized, disciplines. In addition, the Festival intends to celebrate recent developments in film preservation and will showcase newly restored award-winning films. Moderated discussions and panels will present audiences with an opportunity for an immersive experience in all aspects filmmaking.

"Perugia is the perfect location for an international film festival where there can be an opportunity for a lively exchange on the possibilities of the medium of cinema,” says Paul Feller, Chief Executive Officer, Stratus Media Group, which conceived the idea for the festival, and is producing the event.

“Perugia is not only one of the most breath-taking Italian hill towns with a history of artistic achievement and culinary tradition," remarks Festival Director Karen Arikian (photo at left), "it is also the dynamic home of two internationally renowned universities and a number of significant festivals. That makes Perugia a very youthful city, but one with an incredible artistic heritage. We intend to work with local as well as international institutions to provide a broad platform for the Festival to grow."

For more information regarding the festival and the people behind it, you may go to perugiafilmfest.com , or email This email address is being protected from spambots. You need JavaScript enabled to view it. .
Perugia International Film Festival
March 22-25, 2012
Perugia, Umbria, Italy

SIFF is renowned for not only its massive size but its near limitless scope as the festival, which spans 25 days, features over 250 full length and 150 short films from over 70 countries worldwide.

Last year, SIFF was awarded a grant by the Academy of Motion Picture Arts and Sciences to sponsor their blossoming  African Pictures program. As part of this new charter, SIFF has an unparalleled opportunity to bring African films which would otherwise go largely unnoticed to a new, Western audience.

Festival coordinator Carl Spence had the following to say:

"We are excited to launch African Pictures as a major program of the Seattle International Film Festival. With vital support from AMPAS along with other partners we look forward to the opportunity to shine a light on and bring awareness to provocative, relevant and entertaining stories being told across the continent of Africa through the medium of film."

Amongst this maiden African Picture program is an eclectic group of features sure to capture the attention of many festival-goers. The twelve films included in this year's African Pictures category each offer a unique perspective on modern Africa and span genres from rom-com to suspense, documentary to drama.

For more info on the Seattle International Film Festival go to: http://www.siff.net/festival-2013

The Academy of Motion Pictures has released a list of 71 films from foreign countries -- including first-time entrant Kenya -- that have been submitted for consideration for best foreign language film for the 85th Academy Awards. Some of these films screened at the New York Film Festival, which, in its 50th year, is having its strongest season ever.

They include the Italian selection for best film, Caesar Must Die, a black-and-white film directed by Paolo and Vittorio Taviani. Shot to look like a documentary, it's set in a high-security prison in Rome where the inmates put on a production of Shakespeare's Julius Caesar. While performing they interject details about their own personal lives, suffering and crimes; they are all hard-core criminals, who also happen to be talented actors.

The Taviani brothers have been hard on the festival circuit promoting their film, since the actors cannot; all but one, the excellent Salvatore Striano, who plays Brutus, are in the slammer, some of them with life sentences. The film won the Golden Bear Award at the most recent Berlin Film Festival. At the NYFF press conference the duo were particularly entertaining with Paolo, 81, happy to be the straight man to his older brother, Vittorio, 83, who is the talkative one.

The Romanian entry, Beyond the Hills, directed by Cristian Mungiu, is a disappointing follow up to his excellent Four Months, Three Weeks and Two Days. Set in a convent in Romanian, it is about two young women who forged a close relationship -- most probably sexual -- while growing up in the same orphanage. One of them becomes a nun, while the other young woman, who is obsessed and in love with her, becomes desperate to get her to leave the convent and go with her to Germany. The two leads, Cosmina Stratan and Cristina Flutur, shared the best actress award at this summer's Cannes Film Festival.

The basis of Our Children, by Belgium director Joachim Lafosse, comes from a news story about a housewife and mother of four who commits an unthinkable act. At the press conference, where the director was interviewed on Skype, he said that his intention was to show that the mother "was not a monster." This movie had journalists talking well after the press conference was over.

German director Christian Petzoid's Barbara is a 1980’s Cold War thriller. Nina Hoss, the charismatic star, plays a physician planning to defect while exiled to a small town in East Germany. There's an undercurrent of menace and a fascinating look at how the Stasi, the East German secret police, ran their operations. There's also some cool disco music on the soundtrack because Petzoid likes disco -- especialy Chic -- and because the East German government disapproved of it.

From Chile comes Pablo Larrain's No, which stars an excellent low-key Gael Garcia Bernal as a brilliant Chilean advertising executive René Saavedra who organizes the 1988 campaign to unseat the nototious dictator Augusto Pinochet. This film is shot in a grainy, documentary style to capture the real-life event that toppled the military regime. The savvy, witty film received a lot of buzz at Cannes where it was shown at the Directors' Fortnight and although popular by the critics it is an underdog for best foreign film Oscar.

I liked the Israeli film, Fill the Void, directed by Rama Burshtein, making her dramatic feature-directing debut. The film is an inside look at Israel's closed orthodox Hassidic community in Tel Aviv as seen though the eyes of Shira, an 18 year old girl, who is anxiously waiting to hear about a marriage match she desires. When her sister dies giving birth to a son her mother pressures Shira to marry her brother-in-law and the dilemma makes for an aborbing and well-acted drama.

The film is so lushly and beautifully shot that the men in their boxy hats and the women in their ornate, oddly designed garb seemed to have stepped out of a tableaux of a Jewish Raphael painting. Although Burshtein's film is a long shot for an Oscar, Fill the Void is so good it makes you look forward to her follow up effort.

My money is on Michael Haneke's Amour from Austria to win the best foreign film Oscar. It's impossible to imagine a more exquisite and beautiful film. The film won the Palme D'Or. Acting legends Jean-Lous Trintignant (Z, The Conformist, Three Colors: Red) and Emmanuelle Riva (Hiroshima, Mon Amour) star as an elderly couple, happily married for more than half a century, they are now facing the end of their lives as the wife becomes partially paralyzed after a stroke. It's not exactly cheery -- the chic crowd in Cannes was sobbing -- but the film is so beautifully acted and directed, without being sentimental or manipulative, that it is simply transcendent.

According to Variety, this year Iran bowed out of the Oscar race in protest against the U.S.-made anti-Islam video denigrating the Prophet Muhammad. This is particularly regrettable since Iran has so many strong directors. Last year it won its first Oscar in the best foreign language film category with Asghar Farhadi's family drama, A Separation.

The 85th Academy Awards nominations will be announced live on Thursday, January 10, 2013, at 5:30 a.m. PT in the Academy's Samuel Goldwyn Theater.

Below is a list of the Academy's 71 films submitted for the foreign film race in 2012: